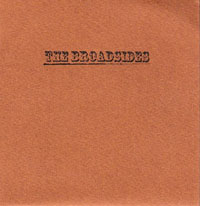 The Broadsides convened in Perth in 2004 to record some American folksongs.

Josh Meggitt on piano and vocal, Dan Erickson and Benedict Moleta on guitars and vocals.

In October 2005 Benedict and Josh reconvened in London to record new songs with two guitars, a hurdy-gurdy and stereo static.

In 2009 Josh and Benedict met again in Perth to record more songs. After the sessions Josh made edits and dubs of some of the tracks.

All Broadsides tracks are available here as free downloads.